I’ve been spending time with the new moto g6 phones for a little over a month now. I put the moto g6 through a full review and was blown away by how well it performed and despite being underpowered on paper, barely skipped a beat during testing.

Along with the moto g6, Motorola also sent along the moto g6 play, which packs a little less overall power but does sport a 4,000 mAh battery, a 25% bump to the battery found in the moto g6. Rather than put the moto g6 play through the same review process, I felt it more beneficial to compare how the two perform against each other. 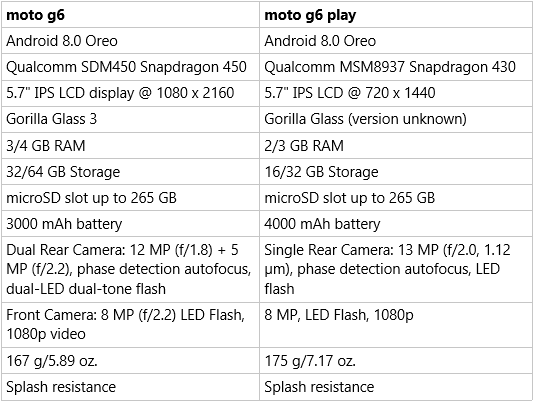 On paper, neither of these phones look like they are capable of much as far as performance is concerned. So which one should you spend your hard earned cash on? Let’s find out!

The Case For The Moto G6

The moto g6 proper feels and looks like a proper smartphone in 2018. It’s display panel, yes only 1080p, will not blow you away but it is easy on the eyes (and battery) and the 18:9 aspect ratio looks really good on the device. The g6 play, despite rocking the 18:9 display comes in at only 720p, and you can really notice it when scrolling through Twitter, Instagram or watching videos on YouTube.

The g6 will takes the points for RAM and storage capacity. My review unit, 3 GB RAM and 32 GB storage performed great and the higher end 4 GB/64 GB option pushes that even further.

The g6 also gets points for being lighter than its more playful counterpart. Albeit, only 8 grams, every little bit counts.

The fingerprint sensor is located on the front of the g6, which I personally do not like, but Motorola has done something very clever to makes its placement much more tolerable. In my review, I commented about Motorola enhancing the user experience thanks to its suite of Moto actions. With the fingerprint scanner being pill-shaped, users can turn off the on-screen navigation keys and use swipe gestures in place of traditional back and multitasking buttons. once I discovered this feature I put my Pixel XL back in the drawer and went back to g6 as a daily driver for a period and really enjoyed the gestures. Android 9.0 is going to have gesture-based navigation, so using it on the moto g6 was a sort of prep-session for what is to come later this year from Google.

The dual-camera on the g6 also gives you the portrait-mode function traditionally reserved for flagship devices. It misses more than it hits, but at the very least, it is there for when the conditions permit it to work effectively. The g6’s camera has a few other neat tricks too. Check out my moto g6 review for more on those features.

The Case For The Moto G6 Play

On paper and in practice the g6 play is outperformed by the g6 proper thanks to its faster processor, more RAM and, a slightly better camera. However, there is a case to pick the g6 play over its more powerful sibling.

The battery on the g6 play clocks in at 4,000 mAh, which is 25% larger than the g6. In my time with the g6 play, I could easily get through 2 days of moderate to heavy use and still have around 10% battery left before finding a charger.

I mentioned above that the g6 play suffered from only having a 720p display, but depending on what your use case is, the 720p screen, which requires considerably less power than higher resolution displays. If you are looking for a phone that is primarily for email, SMS, web browsing but still has the ability to watch videos or disappear down an Instagram-sized rabbit hole when needed picking the g6 play or the g6 is a no-brainer.

The fingerprinter scanner is in its proper mid-rear position, where all finer-printer scanners belong (don’t @ me either, you know I am right!, @gadgetsyrup or @barryweston on Twitter if you do feel compelled to @ me!). You do not have the cool swipe gestures with the rear implementation, but the batwing Motorola logo is inside the scanner this time, something I have been begging Motorola to do since the Moto X was released!

Both the g6 and g6 play ship with the same Android 8.0 version, both benefit from Motorola’s powerful suite of Moto Actions and Moto Display, and both are incredibly well-built for the price. 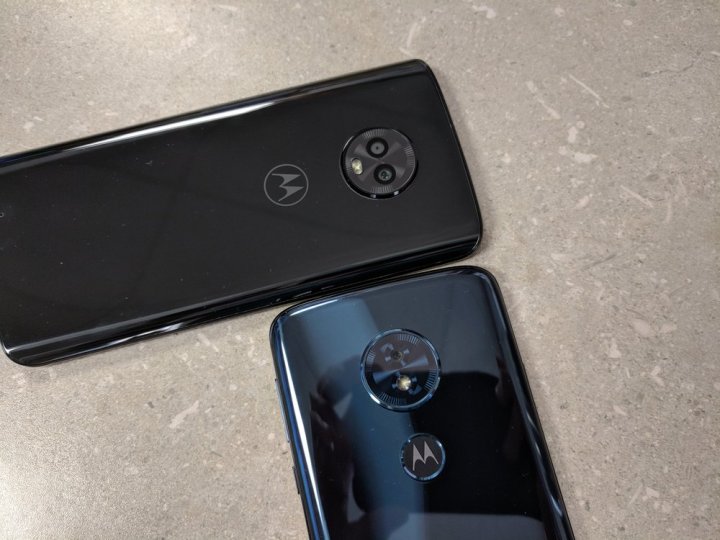 Making the decision really comes down to what you value more. Higher performance, a crispier display and better cameras? Or, do you value battery life and more simple design? The choice is yours!