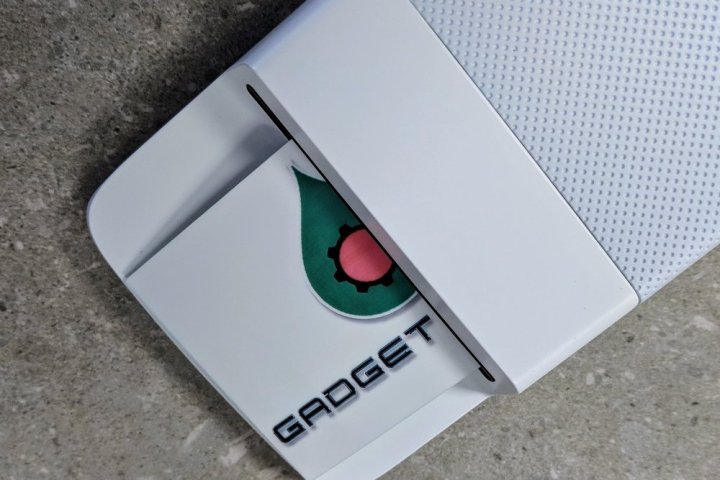 I recently reviewed the Motorola Insta-Share Projector. I went into the review with a lot of skepticism, thinking that this was nothing more than an overpriced gimmick that would be sure to end up in a drawer, never to be seen again. However, after using the projector a handful of times I was amazed at how fun and useful the projector was. My kids really enjoyed watching movies on it, and my wife and I are planning on bringing this on camping trips this summer to set up an outdoor movie theatre at night.

When Motorola sent over the Insta-Share projector, they also sent along another Moto Mod, the Polaroid Insta-Share printer. This mod, like its siblings, clamps onto the back of any current Moto Z phone and through the use of a dedicated app, prints off 2×3 pictures on a special zero-ink paper, otherwise known as “Zink”. The prints also have an adhesive backing so you can print stick them anywhere you like if that’s your thing.

The printer ships alone with no cables, but does come with a starter pack of 10 sheets of paper to get you going, and slip of paper advising you how to load the paper.

I would have liked to see Motorola/Polaroid include a USB A to C cable to make charging easier, but you can use the USB-C charger from your Moto Z to charge the built-in mod battery.

I really like the idea of this printer, having the ability to print any picture, any time and put it anywhere. The immediacy factor of being able to produce prints at home and on the go is a big selling point, especially if you’re looking to print off simple fun photos that you would otherwise just be sharing on Instagram. The quality of the prints will not be “photo lab” quality, but that is not the point. This printer is really geared towards a younger age group, so the ability to print the photos and pass them around is far and away more important than the quality of the image. Another potential use case for this printer would be people working in digital marketing. You, as a social media coordinator, are at an event snapping away for followers on Instagram and Twitter. Pull this mod out and spit out a few snaps for your followers on the ground at the event. Some niche uses for sure, but practical uses if it suits your business. I’m a big Formula 1 fan, and the digital marketing teams for each race team are some of the best out there. I could totally see them getting use of this over the course of a race weekend. Candid shots of the cars, fans, drivers, etc. Print these off, maybe grab an autograph from a driver or two and stick it to a fan, literally.

The share of the printer gives the Moto Z phone the feel of a more traditional camera, shutter button and all. For years I used the Nokia Lumia 1020, which is arguably the most iconic phone camera of all time. One the things that made the Lumia 1020 so great, aside from the sheer power of the 41mp camera, was its snap on or dare I say “modular” camera grip. The Insta-Share printer almost brings that classic feel back, and I really like that. The only problem with the shutter button is that it is a single click only. It does not have a half-press to focus function like traditional camera shutter buttons.

The overall size is pretty good too considering this mod has a printer, paper storage and a 500 mAh battery housed inside. Keep in mind though, that the paper tray only holds 10 sheets at a time.

I was expecting the Zink paper to be very hard to come by and very expensive. However, I was happy to see that you can purchase the Zink paper from Amazon in 20, 30 and, 50packs. This is the same paper used in several other Polaroid products, which helps. If the consumables were not readily available, the printer would be dead on arrival.

I’m not expecting Motorola to give this device away (well they were giving away many mods, including the Insta-Share Projector), but I am also not expecting that people will want to buy it for the price it is being sold for. Originally, the Insta-Share printer was selling for $199.99 USD and has recently seen a drop to $149.99 on the Motorola US site. Now, $150 is not an incredible sum of money, but relating to traditional printers, you can get them for next to nothing since the consumables are so expensive and high margin. In this case, the consumables are expensive/high margin and the device is also expensive.

The mod comes with a 500 mAh battery, which is required to use the mod. When the mod was connected to my Moto Z (2016 version) it would not print if the mods battery was empty. This is a peripheral, that if I am being honest, will not be used very often. If it sits for too long between uses, the battery seems to drain to zero. When I picked it up to print some samples for this review, I found that I had to charge the mod battery for a while before being allowed to print. It also charges very slow from what I can tell. Not a major deal breaker, but an unnecessary annoyance either way. 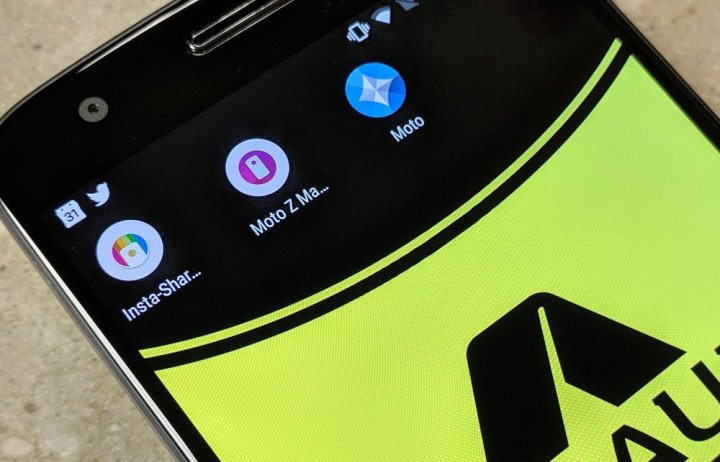 This, I think, is my biggest gripe with this mod. For reasons unknown, you can only send prints via the Polaroid Insta-Share Pinter App. In the Android world, we’re usually pretty spoiled by the various ways in which you can share from app to app or service to service with little to no hoops to jump through. Not the case here; you are stuck with this less than ideal app.

What I would have expected, was giving users the ability to print from the Moto Camera app. Yes, the device is a Polaroid, but it is still a Moto Mod, and I would have expected the printer to work seamlessly with Moto’s own imaging software. From within the app, you can print photos directly from Google Photos, Instagram and, Facebook which is great, but I would have expected to be able to initiate a print via Android’s robust share menu. You can share to almost any app/service via the share menu. Being able to click the share icon from any app and have the Insta-Share printer be an option seems like a no-brainer to me. 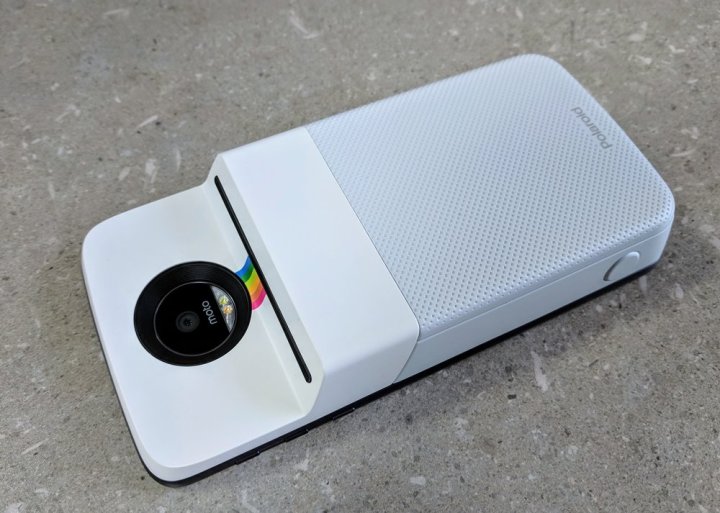 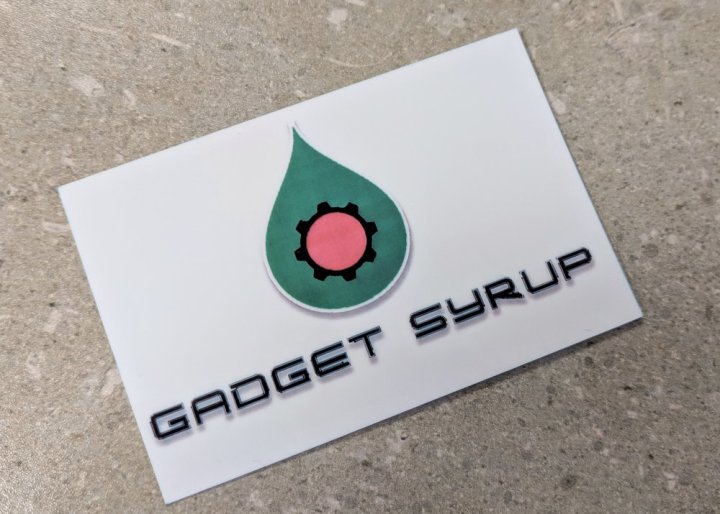 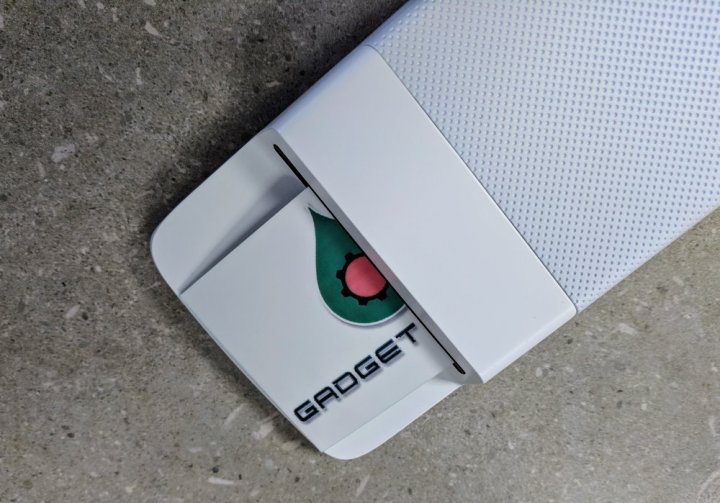 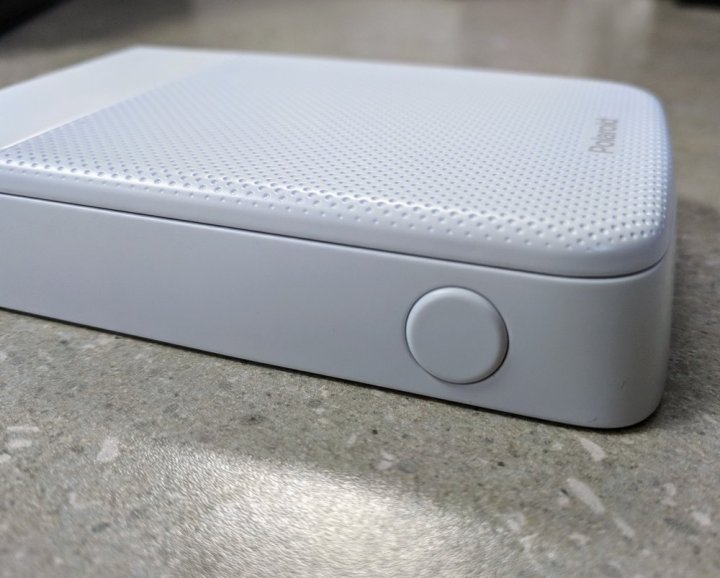 Should You Buy This?

The printer mod is very well built, performs well and the print quality is passable, but not by any means outstanding. Therefore, unless you have a very specific use case that will enable you to use the printer frequently, I would give this a pass. If you want to buy it as a nice to have to use at Christmas sort of thing, I do not think you would get your money worth out of it. We upgrade our phones frequently in this day and age, so investing in a mod you may use a few times a year isn’t ideal. There are a lot of other great mods out there I would pick over the printer for most people.

BUT, if you fit one of those niche use cases, like the digital marketer example I used, this mod is right in your wheel-house and pairing it with a Moto Z could be a very worthwhile investment.

You can purchase the Moto Mod Polaroid Insta-Share Printer from Motorola directly. Check it out by clicking the link below.

What do you think about the Polaroid Insta-Share Printer or Moto Mods in general? I would love to hear from you, so please feel free to comment below!