I have been a big fan of Microsoft’s Surface lineup since day one. Although very dated by today’s standards the original Surface design language was unlike anything on the market at the time. It was a full-fledged laptop PC in the body of a (slightly large) tablet, and that is exactly how Microsoft potitioned it. “The tablet that can replace your laptop.”

Now, let’s be completely honest though. The first Surface Pro device absolutely could not replace your laptop. The kickstand, despite being revolutionary in design only had one position available, the keyboard/cover was flimsy and the typing experience was a nightmare.

Even the Surface Pro 2 was not the laptop replacement Microsoft kept pushing on everyone through various marketing campaigns despite Microsoft’s best attempts to address the Surface’s shortcomings with a more sturdy keyboard/cover, a two-position kickstand and an improved trackpad.

It was not until the Surface Pro 3 and 4 that the marketing pitch of “a tablet that can replace your laptop” could be taken seriously.

However, despite the major leap forward in functionality fans of Microsoft Hardware still wanted more. Microsoft released a few iterations of the Surface Book which is more “laptop-like” than the Surface Pro devices but the Book still has a few functionality issues that steer your everyday laptop user away.

Finally, in 2017 Microsoft decided to complete their hardware lineup with the Surface Laptop. This product release, though welcomed, was surprising since Microsoft’s stance with hardware releases was to only create a new product if it was going to define a new category, not enter into an existing category. This justification was a way to keep its partners happy. Companies like HP, Dell, Acer, and others were put-off when Microsoft released the original Surface Pro because it looked like Microsoft was directly competing with its partners. This was not intended to be the case, but the optics were not good.

It was also reiterated by Microsoft’s Chris Capossela just before Christmas 2016 on an episode of TWiT’s Windows Weekly with Paul Thurrott and Mary Jo Foley. He was clear that Microsoft does not want to compete, it wants to lay the groundwork for a new category and aide its partners in creating great products. Which is exactly what has been seen over the last year. Looking at any major PC makers lineup you will be sure to find near exact copies of the Surface Pro, with maybe one or two tweaks.

Despite all of that though, Microsoft still decided to move forward with the Surface Laptop despite the device not being first in a new category.

If I were HP, Dell or another OEM partner of Microsoft’s I would be upset with Microsoft. As an enthusiast though, I welcome the Surface Laptop to the market because I am, 1) a big Surface fan and, 2) I feel the Surface Laptop will continue to push OEMs to build even better laptops. Take the Dell XPS 13 or HPs Evo lineups. Those two laptops are leaps and bounds ahead of the Surface Laptop.

Not a lot comes in the box with the Surface Laptop. My unit shipped with only a Surface power adapter, power cord, and the Surface itself. Nothing more, nothing less. The Surface Pen is not included with the Laptop, but is compatible. 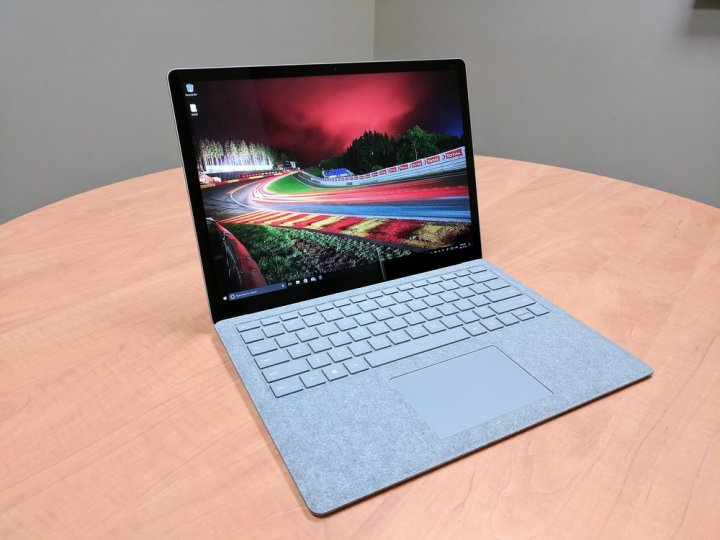 Windows Version: Windows 10 S (can be updated to Pro*)

Complete specs from Microsoft can be seen HERE.

The laptop is just over half an inch thick but is a tad on the heavy side weighing in at 2.8 pounds. This is not extremely heavy when compared to my Lenovo X1 Carbon (2.6 pounds), the Surface is a fraction of a pound heavier, which can be attributed to the metal materials used for the body of the laptop. Despite being slightly heavier than similar machines it is a pleasure to use and travels well.

Many people have ridiculed Windows Hello, Microsoft’s iris scanning technology which allows users to sign in quickly thanks to the iris scanner built into the top bezel of the display. I am a huge fan of this functionality. For me so far, it works so well that most times I do not even see the lock screen when the laptop comes out of sleep mode because the iris scanner has picked me up so quickly. The key I find to making Hello work correctly is to let it scan you in decent natural light. Getting the saved iris scan right has allowed Hello to pick me up and log me in quickly, even in less than desirable lighting conditions.

Microsoft also took some heat from the media and potential consumers over the use of Alcantara for the top covering surrounding the keyboard and trackpad. Alcantara is a fabric that is commonly used in high-end luxury cars for the headliner and other fabric covered accents in the vehicle. I was skeptical prior to the Surface arriving, but now that I have been using the laptop for a while now I actually really like this material. I was expecting more of a felt-like feeling, much like the keyboard/cover on my Surface Pro 2, but it is considerably thinner and therefore more firm. It has not picked up any staining during my use and my palms can rest and slide with easy on the palm rests. I think most of those who were against the fabric covering were complaining for the sake of complaining.

I also am in love with the display on the Surface Laptop. It is very bright, the saturation levels are perfect (for me) and having touch is a major benefit. My previous Lenovo X1 Carbon was a touchscreen model. When I upgraded to the 2016 model it came sans-touch. Having touch, and Surface Pen support, on the Surface Laptop is great. Even if you only use to scroll web pages and emails or pinch-to-zoom on an image, it is a feature worth having.

Windows 10 S has been surprisingly pleasant to use during my time with this laptop. Windows 10 S, if you were unaware, only allows users to install an application from the Windows Store. Installing Win32 legacy application (.exe files) is not possible. When attempted the OS will prompt you that it is not able to perform this task links to a page explaining how to upgrade to Windows 10 Pro. Yes, I am missing being able to use Photoshop, but Elements is in the Store if needed and the Photos app that comes built into Windows is incredibly powerful and will only get better once the Surface Laptop receives the Fall Creators update. It hasn’t all been great with Windows 10 S though, continue to “The Bad” for more on that.

The Surface laptop, like all other Surface products before it is an exceptional piece of hardware. I only have one complaint about the hardware, and it is a pretty big one. As I mentioned before, my “daily-driver” laptop is a Lenovo X1 Carbon (2016). Lenovo has for years been known as king-of-the-hill in the battle for the best laptop keyboard. No other manufacturer has been able to beat them (in my opinion). I had extremely high hopes for the Surface Laptops keyboard, but I am sad to report that this keyboard just does not cut it. For a laptop at this price point with such a great overall build quality the keyboard should be near perfection. They key-throw is too shallow, and the entire keyboard seems to wobble or shift around when typing. It is good, and for most people, it may be perfectly acceptable, but if the keyboard on the X1 Carbon eats the Surface Laptop’s lunch every day of the week. One win I will give the Surface over the X1 Carbon is the function key (Fn). When pressed it remains engaged while you complete the action you are performing; such as ALT+F4 to close a window. The key has a small LED to indicate that the F-keys are enabled. It does not automatically disengage, which would be nice, but is better than having to hold the key like on other laptops.

The software experience with Windows 10 S has been mostly positive, but there is one major complaint I had to share. Microsoft Edge. The browser that took over for Internet Explorer seemed poised to be a real contender against Chrome. This is not the case. Now, don’t get me wrong though, Edge is lightyears ahead of where Intenet Explorer was. During my first week or two with the Surface, Edge was snappy and responsive. In recent days, however, it has felt more like a Samsung phone suffering from “OS-rot” after 4-6 months of use (come at me Samsung fans, you know it’s true!). Up until this part of the review, I was using Squarespace, via Edge to type this review, lousy keyboard and all. I reached a point though where I just couldn’t handle it anymore. Everything was lagging including keystrokes, clicking links sometimes left me waiting for several seconds before responding, which leads to double or triple-clicking said links. Yes, Edge does has made a lot of progress since Windows 10 first came to market and just recently Microsoft has been touting that Edge now has more than 70 extensions available in the Store. Extensions are great, but Edge is simply not

The Bottom Line: Should You Buy The Surface Laptop?

For most, the keyboard on the Surface Laptop will be perfectly acceptable. I didn’t even mention the trackpad either. It is near, if not at, Macbook (pre-force touch) levels of quality.

The largest drawback for most is going to be Windows 10 S. For me, aside from Edge being mostly a pain to use, staying within the Windows Store is fine. Now, I was a Windows Phone 7/8/8.1/10 user, so I was able to get buy with limited and slightly lower quality app selections for years. However, if you need to have Adobe Photoshop or Premier you’re going to want to make the jump to Windows 10 Pro. Fortunately, Microsoft is allowing Windows 10 S users to upgrade to Pro at no extra cost until December 31st, 2017. Starting in 2018, customers will need to pay a one time fee of $50 USD.

So, would I recommend the Surface Laptop? Yes, absolutely. This may be the best Surface product Microsoft has ever released. The hardware experience overall is excellent. Battery life has been excellent. Windows Hello login is a major win. The only thing that is holding this laptop back is Windows 10 S, but that can easily be remedied at a fairly low cost.

You can purchase the Surface Laptop directly from Microsoft HERE.

There has been a lot of buzz of late regarding Microsoft potentially exiting the hardware space by 2019. The Surface Laptop could be a key indicator of this desire since it is not a new and innovative product category and was released merely “just because.” I do not see Microsoft getting out of the hardware space anytime soon. The Surface lineup allows Microsoft to showcase the power of Windows 10. One of the problems Microsoft has faced over the years is OEMs picking and choosing what parts of Windows customers can take advantage of thanks to the inclusion or exclusion of specific hardware (touchscreen, iris scanning, etc.). By keeping the Surface lineup around Microsoft can continue to innovate with Windows and showcase that innovation with their hardware.

It is also worth noting that while I was writing this review, Panos Panay, the head of the Surface team has publicly said that the news of Microsoft killing off the Surface line and getting out of hardware is “so far from the truth.”

What do you think? Would you consider the Surface Laptop for your next laptop? Would you give Windows 10 S a chance or go Pro immediately?